The major scale is the mother scale – the foundation from which we build all scales, chords and melody. For this course the guitar is tuned to open E chord so lets breakdown the E major scale and take a closer look at the number system.

The major scale  is made up of seven distinct notes, plus an eighth which duplicates the first an octave higher. We give each note a number as follows : 1 2 3 4 5 6 7 8

USING THE NOTES OF THE MAJOR SCALE

As you can see the guitar is tuned to an E major Chord and if you understand how TRIADS work you will know that a major triad is built from the 1st 3rd and 5th degrees of the major scale.

So the fourth string, third string and second string E, G# and B played together is a triad – play all the strings together and you have a very full sounding chord. 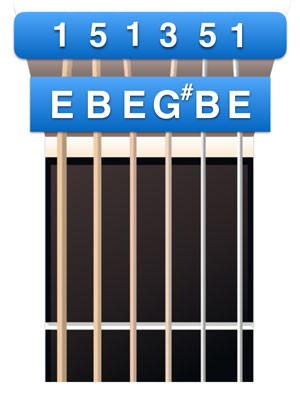 Some guitarists might be thinking “Hey Paul just give me the licks man I don’t wanna bother with this stuff” But as I’ve said to many students if you wanna play like Sonny Landreth or Derek Trucks you gotta know some basics,  and I can promise you this ; these guys know this stuff inside out – they never get lost on the fretboard!

Don’t think for a moment when Ry Cooder or Mark Knopfler say “yea I don’t read music, never have” that they don’t know what a triad is or a scale is ! I think a lot of guitarists are confused by this and that “reading music” is all that music theory stuff. It’s simply not the case – of course these guys don’t read music its simply not important , but they certainly know the mechanics of the fretboard!  Anyway rant over …”:)

So basically I am going to be referring to numbers throughout the course – for example the E minor pentatonic scale is built like this –  1st b3rd 4th 5th b7th – a Five note scale taken from the E major scale.

The b sign means flatten the note a semi-tone , so the minor pentatonic scale would look like this:

Your ears will thank me for this later when you start to hear how the flattened 3rd sounds amongst all the licks your going to learn in this course.

Remember its one thing to “monkey see monkey do” back a few licks parrot fashion – its another to improvise freely create your own licks and move around the fretboard with ease and never get lost.

I wont lie, that’s going to take work ! But thats why your here right so let’s get crackin..

Back to
Cookies
To make this site work properly, we sometimes place small data files called cookies on your device. Most big websites do this too.
Accept